What is the best Martial Art for kids?

This article was written by a Jiu-Jitsu student and parent, a parent that started training Gracie Jiu-Jitsu the day after his kids started.

About a year ago my 10 year old son asked me if he could learn a martial art.  So he asked me: “What is the ‘strongest’ martial art for me to train in?”

The key for me was to find the best Jiu-Jitsu martial art instructor in the Hills District, one who relates well with children, serves as a positive role model and can instil positive values that traditional martial arts are built on. Martial arts that promote traditional customs and courtesies, in contrast to some programs in the Hills District that essentially teach brawling.

There are several common desired outcomes parents want from the training in martial arts for their kids: discipline, courtesy, integrity, self-defence, self-control, self-confidence, self-esteem. Respect, too, is essential to the martial art. Not just respect for instructors and fellow students but also for body, mind and time.

An attractive attribute of Jiu-Jitsu for kids is the emphasis on having fun. Training is all about fun, competition free and full of cooperation. That is what Jiu-Jitsu offers my kids. We’re talking about kids here and most kids aren’t interested in serious stuff. They don’t need to be. Mastering Jiu-Jitsu demands a serious mind, it takes years of study and belts are not given out as easily like in some of the other martial arts. It will be years before your kid is ready to begin a black belt journey. Until then kids learn more when they’re having fun.

I am of the opinion that kids who train in martial arts are less violent than those who don’t. Do you know which kids bullies and start the fights in schools? It’s the kids who have no discipline, no training, and low self-esteem.  Kids who train in martial arts – any form of martial arts – tend to become more responsible, more mature and far less likely to engage in violence. The process of going through a martial arts program and paying attention to an adult instructor makes kids more intelligent and more responsible. Sure, there are exceptions to this, but by and large, training in martial arts makes kids less violent. Martial Arts teach kids how to avoid fights and conflict rather than look for it.

Jiu-Jitsu teaches beginners first how to avoid hurting themselves. Appealing to kids, Jiu-Jitsu training begins with learning to roll and break-falling. Essentially tumbling correctly; learning to fall without getting hurt.

As your child progresses, they will learn how to escape from a dangerous situation and then how to control an aggressor though throws, holds, and locks. This is all taught through cooperation instead of competition. There are many different levels of proficiency. However, Jiu JItsu is similar to chess in that it can never be perfected; every new advancement leads to another challenge. This provides a lifetime of rewarding engagement.

Another great aspect of Jiu-Jitsu is that it doesn’t rely on muscle strength. Jiu-Jitsu practitioners learn to utilize leverage, which can give even those very young or very old incredible powers. The theory behind Brazilian Jiu-Jitsu is that it is more efficient to control an attacker by using the floor to assist in balance and control. A characteristic of Jiu-Jitsu is being able to control a larger opponent.  This is achieved through ground control positions and performing the leverage techniques with precision, which means people who have less muscle strength, can still overcome larger opponents. Your child will gain much confidence in being able to accomplish incredible feats without as much as a grain of aggression in their heads. 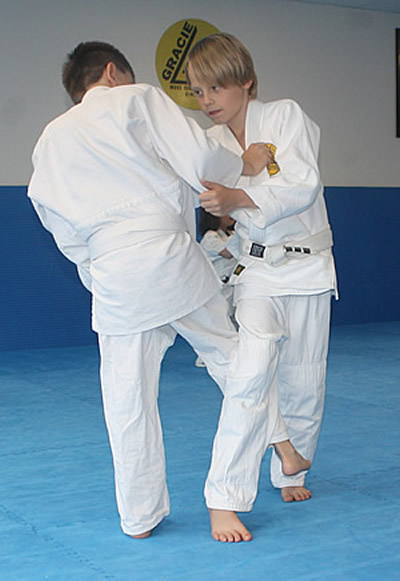