What to expect as you start your self-defence training

Playing Brazilian Jiu-Jitsu as a sport is fun, but don’t forget it started as a martial art for self-defence. For that reason, Gracie Castle Hill is home to grapplers from all over the Hills District who picked it up to better protect themselves.

Signing up to a self-defence school is scary. If you’re in the Hills District and have flirted with the idea of taking up martial arts, note that Gracie Castle Hill offers free trial classes.

Before getting into tips for beginning your martial arts journey, here’s a quick explainer on why Brazilian Jiu-Jitsu (BJJ) is the art for self-defence. 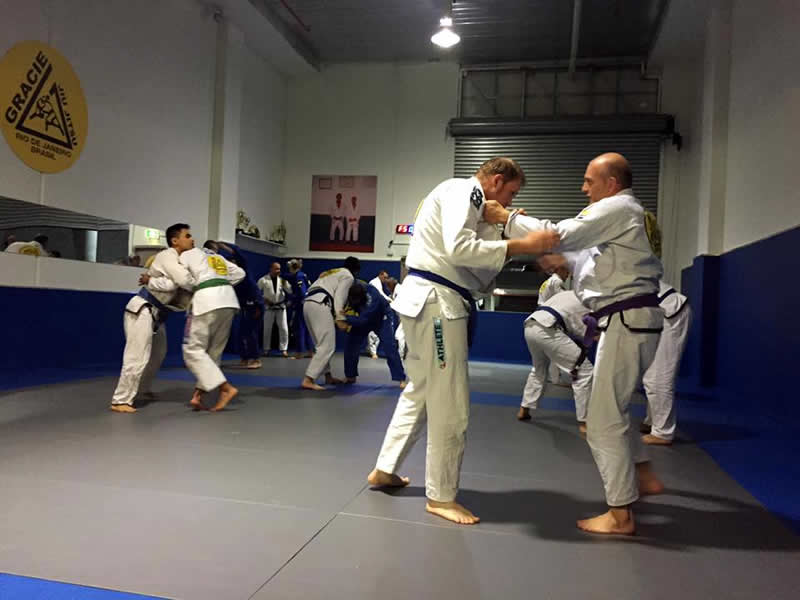 All shapes, all sizes

The principle underpinning BJJ is simple: Self-defence techniques should work against bigger, stronger opponents. It’s for this reason that much of what we practice in BJJ takes place on the ground. Without a vertical base, it’s much harder to generate force. On the ground, much of your power comes from your hips. For this reason, much positional training in Jiu-Jitsu focuses on neutralizing your opponent’s hips.

Once you understand principles like these, you’ll be able to overcome much larger foes. Compare this to striking martial arts, like Muay Thai or boxing. These systems do offer self-defence skills, no doubt about it. But athleticism, strength and power are also much more integral to success.

Certainly, athleticism is still an asset in Jiu-Jitsu. If two opponents have similar skill levels, the stronger one is likely to win. But the fact is that with sufficient technique, you’ll be able to overcome huge size and strength differences.

It’s for this reason that BJJ is particularly championed for women’s self-defence, as well as for kids.

Jiu-Jitsu is satisfying, but it’s not easy. To help make your first month or two as smooth as possible, here are some things you’ll want to know.

You won’t be in shape. Sometimes people feel like they’re not in good enough physical condition to start Jiu-Jitsu. The truth is that no one is in good Jiu-Jitsu shape until they train Jiu-Jitsu. It’s a particular workout for your body, one that can’t be replicated by running or lifting weights. So if you find yourself exhausted after 2 minutes of sparring, don’t worry. We’ve all been there.

One quick tip: Focus on your breathing. Even great athletes who can run 20 kilometers often are sucking wind after minutes on the mat. It’s not because they’re not fit, it’s because beginners often hyperventilate without noticing it. When you’re new, make a point to focus on keeping a steady breathe.

You’ll get cuts and bruises at first. It takes a while for your body to get used to self-defence training. This is especially true if you don’t already participate in sports. Don’t be surprised if you find small cuts on your hands or bruises on your body after your first few classes. It’s normal and, after your body calluses up, that will stop happening.

People sweat. It’s unpleasant, but you will be sweat on. It freaks newbies out, but you get used to it.

You should stretch. In BJJ, you’ll learn how to defend yourself by making yourself as tight and compact as possible. You’ll learn to keep your elbows to your hips and your back rounded, to eliminate space that opponents can take advantage of. BJJ is safe, and when people do get injured its often an overuse injury or due to intense muscle tightness.

Get a good full-body stretching regime and do it after class or before bed. It doesn’t need to be long, even 10 to 20 minutes will do. For this reason, yoga is among the best ways to supplement your self-defence training.

Gracie Castle Hill offers women from all over the Hills District an opportunity to boost their self-defence skills. Here are some tips especially for our female members.

Don’t roll big guys right away. It’s important in BJJ to step outside of your comfort zone. That said, safety always comes first. As you begin your training, you may be intimidated by some of the bigger opponents on the mat. Always feel free to avoid sparring, especially in your first few weeks and months.

If you’re in the Hills District and are interested in self-defence classes, come into Gracie Castle Hill for a free lesson.